How to Chromecast TED Talks Shows to TV [ 2 Ways] 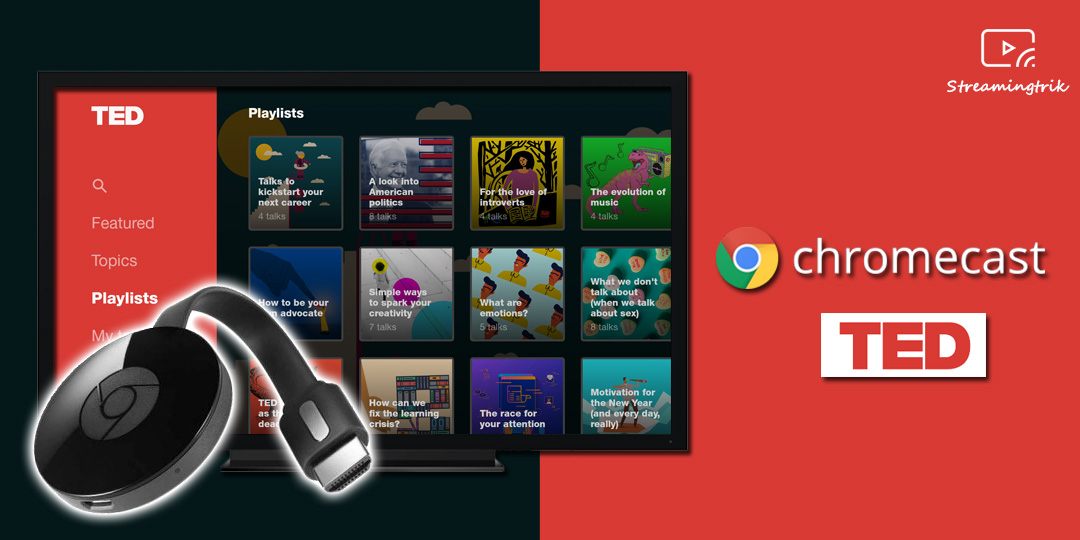 TED is a non-profit organization that was founded to share ideas and talk about all the issues going around the world. It is very unlikely that you haven’t watched or at the very least heard of a TED talk show. The platform features speakers present all around the world who talk about their experience regarding a particular topic that has to be very much discussed in our world right now. The app has 3000+ videos in 100+ languages topics, varying from technology to philosophy to art and everything in between. We will discuss how to Chromecast TED Talks to your TV from here.

You can Chromecast TED from your PC using the Chrome browser or from your Android or iOS device by using the inbuilt cast icon on the apps. The app is free to download for both Android and iOS devices. The platform also has a web version that you can access from any browser.

How to Chromecast TED

You can cast TED Talk Shows to Chromecast-connected TV in the following two ways.

1. Firstly, make sure your Android/iOS device and Chromecast device are connected to the same Wi-Fi network.

2. Then, download the TED Talk app on your Android/iOS device from the respective app store.

3. Open the TED app on your Android/iOS device and tap on the Cast icon from the top right corner of the screen.

4. Look for and select your Chromecast device from the available devices.

5. Now, you can watch TED on your Chromecast-connected screen.

1. Make sure your PC and Chromecast device is sharing the same Wi-Fi connection.

2. Go to the Official Website of TED from the Chrome browser on your PC.

3. Now, click on the Customize and Control icon, also known as the Three Dots icon, available at the top right corner.

5. Next, select the Chromecast device from the list of available devices on the Cast tab pop-up.

6. Finally, click on the Sources drop-down and choose the Cast tab to stream to cast the TED website tab alone.

Related: HIDIVE Chromecast: How to Cast to TV

7. Once the connection is established, the TED website tab will be cast to your Chromecast connected screen. Now, play the video you want to watch.

Yes, the TED app on both Android and iOS devices comes with a built-in cast icon.

The platform is totally free to use as TED is a non-profit organization, monetizing their content isn’t their primary goal.